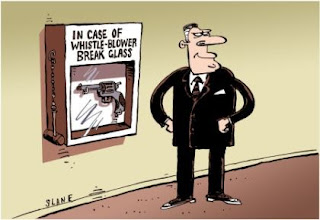 The dysfunctional and unaccountable Broads Authority plumbed new depths last week, as they took the extraordinary step of removing me from the Navigation Committee - for telling the truth about members being misled.

Disappointing as this might be from a personal perspective, however, the more important issue is the Broads Authority’s continued determination to cover up wrong-doing and incompetence, their contempt for free speech, and the censuring of whistle blowers.

For 16 months, the Broads Authority has expended what must be considerable sums of public money on investigating my blog posts - involving not one but two barristers. But, instead of looking into my “very serious” claims,  all they’ve investigated is whether I breached their internal code of conduct by making them.

It’s obvious that they know what I said was true; why else would they have spent so long avoiding the questions and finding time-consuming ways of shooting the messenger instead? If John Packman had really believed I was wrong, he would have revelled in proving it. Instead, he refused to meet me and argued semantics like whether a mooring is a mooring when a boat isn’t tied to it.

Having spent money on a barrister, you would expect the BA to take their advice. But the barrister’s recommendation was for an informal resolution, rather than disproportionate sanctions. There should be talks, and reconciliation. And that obviously didn’t fit with the Authority’s overall objective, so they refused to meet me and altered the complaints procedure to remove informal resolution as an option.

This meant taking the complaint to a full hearing, with a Panel made up of the same people who brought the complaint in the first place.  Can there be a more obvious breach of the rules of natural justice - which require there to be no appearance of bias, and for nobody to be a judge in their own case?

Continuing this theme of transparency, they refused to hold the hearing in public, refused to allow a recording to be made and refused to allow me to cross examine the officers who misled the members. And then took a week to issue a decision, which should have been made on the same day.

That decision ignored the advice of the independent investigator, and instead proposed a raft of sanctions personally requested by the Chief Executive, who should not even have been involved in the process.

I was given 7 days to retract my statements, apologise to all concerned, remove the blog articles and promise never to do it again. If I failed to comply, they would remove me from the Navigation Committee - in breach of the Broads Acts, the Localism Act and their own constitution.

I did not comply, because I will not be bullied into retracting the truth and supporting a cover up.  And so, last Friday, just two days after their deadline expired, the Chairman of the Authority asked members to vote to remove me.

My offence was a failure to show “leadership” - which according to the Broads Authority means promoting confidence in itself and its officers at all times. This is pretty much the opposite of the definition of leadership in the Nolan Principles of public life, which requires members to challenge poor behaviour.

In an unelected quango like the BA, considerable trust is placed in members by stakeholders - who rely on them to challenge and scrutinise the advice and recommendations of the officers, to protect the public interest. I have presented clear evidence of wrong doing - anyone reading the articles can tell that members were misled - but, unfortunately, the majority of members seem more interested in protecting the reputation of the Authority than they are in investigating poor behaviour. Because they are trained to believe that’s what they must do.

This Authority is utterly out of control. They would sooner remove a member than admit that they got something wrong, and in any event it is simply not in their gift to remove an appointed member of the navigation committee. But they did it anyway - because there is nobody to stop them.

This leaves toll payers with one less voice on the navigation committee for the next 6 months, until the next round of appointments. And it sends a clear message to stakeholders, local authorities and government that the BA can - and will - do anything it likes.
Posted by Unknown at 08:13