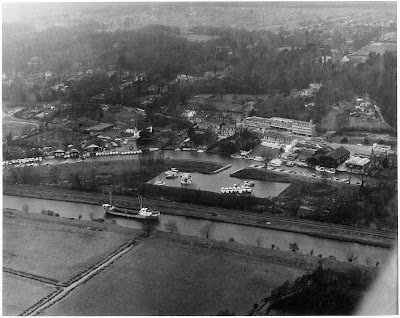 A couple of weeks ago, a sad chapter in the history of Thorpe Island closed - as Roger Wood was forced to sell Jenner's Basin for less than half the price he paid for it.

Not only was this a personal tragedy for Roger Wood, and for the people who have to find new moorings, but for the Broads itself. This marina was once a proud part of the Thorpe Island hire business (Harts, Jenners and Wards) and it's a great shame that this mooring facility is to be lost rather than restored.

The marina had fallen into a dilapidated state by 2008, but Roger Wood's original planning application to restore and improve the moorings faced substantial objection from the owners of the houses on the other side of the river who had, by then, become accustomed to the marina being largely empty.

It's ironic, then, that those houses would never have been built in the first place had it not been for the much discussed “covenant” - which restricted the use of the marina so that it could only be used for the mooring of private boats, in exchange for planning consent to build the new houses at Thorpe Old Hall Close.

You can see from the aerial photograph above that the basin was indeed used for mooring boats in the 1960s, and it has been used for that purpose (albeit in small numbers) ever since. It was still clearly capable of being used for mooring boats - so why was the BA so utterly determined to prove that the use had been abandoned? What possible benefit could that have for the Broads - when there is already a perception that mooring numbers are in decline?

The thing which makes Thorpe Island awkward for many boat owners is, of course, the pair of low railway bridges at each end. So it's perhaps not surprising that a large number of boat owners on the island are “live aboards” who have little need to take their boats to and from the main river. Residential moorings have long been a contentious issue on the Broads, but there is an undeniable demand for them and so the BA recently introduced a policy which supported them - in “appropriate” places. If you read development management policy DP25 (page 47), you will see that Thorpe Island would be a near-perfect location for properly controlled and managed residential moorings, ticking every box in the policy - if our planners hadn't gone to extraordinary lengths to exclude it. Instead of figuring out how to make this a flagship residential mooring site, close to shops and public transport, there was talk of “shanty towns” and “feral live aboards” - and a 6 figure legal battle funded from the public purse.

Less widely known is the fact that the battle wasn’t limited to the marina - Roger Wood also had customers moored on the river bank, a right which had been established long before the marina was created and was not the subject of any “abandoned” planning consent. There was no breach of planning control, so - in order to get the boats removed - the BA asked Norwich City Council (the owners of the river bed) to issue trespass proceedings against boats moored on the river bank - but only the ones on the island side, which seems rather arbitrary. Why were the BA so keen to have the boats removed when there was no planning breach? And why was it trespass to be moored on the island side of the river but not on the mainland side? This tends to reinforce the view that this matter had moved beyond planning enforcement and had become altogether more personal.

Last week, the screw was turned ever tighter on Roger Wood and the Thorpe Island residents, when Thorpe Town Council announced new mooring regulations at Thorpe Green - preventing boat owners at the former Hearts marina from mooring on the mainland more than once in a 48 hour period. And whilst nobody wants to see wrecks moored on the Broads, the Council's policy of only allowing “well-kept” boats on Thorpe River Green gives further credence to the arguments about gentrification and discrimination.

In the end, the toxic planning situation at Jenner’s basin ended up blighting the value of the marina, so that the only people willing to buy it were the key objectors to Roger Wood's ownership and planning applications. By aligning itself so closely with the objectors who ended up buying the marina, the BA has exposed itself to justified criticism that it took sides in a neighbour dispute instead of protecting the wider public interest. The subsequent self-congratulatory back-patting amongst those involved in the planning debacle was appalling.

Clearly the Broads Authority has a duty to enforce planning law, but this situation escalated alarmingly over several years and members were simply not involved or informed until things had spiralled out of control. For me, this demonstrates the fundamental governance failure at the BA, with members trained from the outset to believe that their duty is to defend the decisions of officers, rather than to ensure that those decisions are fair and reasonable in the first place. Members have an absolute duty to act in the public interest, but they often find themselves conflicted by pressure to protect the reputation of the BA instead - usually because they have become involved far too late in the decision making process.


Sadly, we've arrived at a conclusion where a man has been financially destroyed, a unique Broads marina has been lost and a public Authority has spent a fortune making it happen. This is a failure of scrutiny, accountability and justice, and those responsible should look to their consciences.