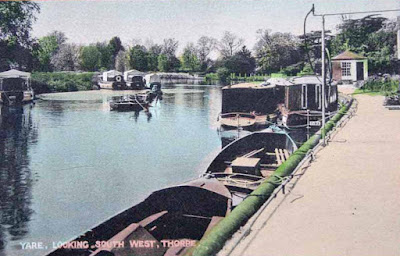 Note: The original version of this article contained an error - I believed that the bridge was not mentioned at the May 2017 planning committee meeting, due to background noise on the recording. In fact, the bridge was briefly mentioned (see revised point 5) and I am happy to make a correction.  This only came to light two days before a code of conduct hearing against me 16 months later, when I was provided with an official transcript of the meeting. Amazingly, the Chief Executive did not notice my mistake last year - despite allegedly spending 3 days “investigating” my concerns including “listening carefully to the recording”.

My first article on Jenner’s basin – which was intended to close an unhappy chapter in the history of Thorpe Island and express sorrow at the loss of moorings – resulted in two code of conduct complaints against me, both of which are still under investigation. One of them – a lengthy tirade by a senior officer – included a long appendix featuring details of my contributions to public internet forums and screenshots of my “friendships” on social media. This, from an Authority which described allegations of keeping dossiers on members as “a worrying untruth”. [Update September 2018 - the BA have decided not to determine those complaints, rather than dismiss them or make a decision].

These complaints follow a series of attempts to control the behaviour of members and to isolate, marginalise and discredit the ones who will not be controlled. This includes carrying out an “investigation” of BA members who might have had any form of contact with the Save the Island group, demanding copies of private and personal emails and other correspondence in confidence, and then circulating selected responses amongst all members in order to discredit the “offenders”. The Chief Executive attempted - on two separate occasions - to have at least one of these members removed from the Authority by their appointing Authority. Fortunately, the council leader concerned refused to accede to this clear affront to democracy.

My second piece, concerning the new draft policy for the island, resulted in a “briefing note” being sent to members of the planning committee on the eve of their June meeting, which continued the theme of misleading them about the decisions of the appeal inspectors, action taken for trespass and the historic mooring situation at the western end of Thorpe Island.

I emailed members, concerned about the way that they were being comprehensively misled in order to persuade them to sign up to a new planning policy which continued the assault on mooring rights on this stretch of the river Yare. As usual, however, the response of certain members was to refer my email straight to the Chief Executive’s censorship department, rather than perform their public duty to scrutinise the actions taken by officers.

Instead of taking responsibility for investigating the misleading statements made to members, Dr Packman has demanded that I either prove an unlawful motive for these actions, or retract all my comments. It’s as though he thinks it’s ok to mislead members, as long as nobody can prove an illegal motive for doing so.

I’ve never claimed an unlawful motive, I’ve simply asked why the Authority is so desperate to prove abandonment of mooring rights on a navigable river, that it would spin a web of untruths to convince members to support a policy which extinguishes these rights in perpetuity. If it wasn’t in response to the relentless pressure from objectors, then what was the reason? Whatever the motive, the action is not to the benefit of navigation stakeholders, and there is no obvious wider public interest being served.

I’ve replied to the Chief Executive, asking him to respond to the following points:
Membership of an unelected quango like the BA is a privilege which comes with clear responsibilities to act in the public interest, and stakeholders are entitled to expect that members - especially the Chair and Vice-chairman - will scrutinise the decisions of the executive rather than defend them at all costs. The Chief Executive, meanwhile, has a duty to uphold all three of the Broads Authority’s statutory purposes, and the public should have confidence and trust in his ability and willingness to do so.

I will share his responses to my questions on this blog.