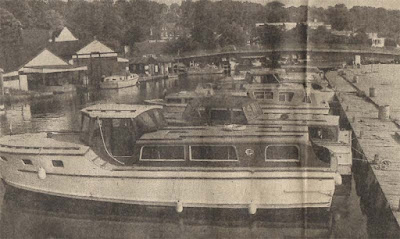 Readers might recall from Episode 3 that I have raised 10 instances of Broads Authority members being misled over the past 6 weeks, in respect of the proposed new planning policy for Thorpe Island.

Unfortunately, the Chief Executive is refusing to investigate these clear misrepresentations of fact and has instead given me an ultimatum to prove that officers had an unlawful motive – or withdraw my comments. He continues to duck all of the questions and instead persists in claiming that I’ve alleged a hidden, illegal, agenda - which I have not.


In place of investigating the issues I raised with him,  he’s raked back through my dossier (the one which the former head of communications reported doesn’t exist), and found a comment which I made on the EDP website 16 months ago:

“I have at least 4 documented instances of officers altering the wording of legal documents (including the 2009 Broads Act and the Thorpe Island Section 52 Agreement) in order to change their meaning to persecute individuals.” (EDP 29th February 2016)

to which he responds:


“May I take it from this that you accept that your previous public allegation … made in a post on the EDP website, has no foundation, is unconnected with your recent allegation and is withdrawn? … You appear to be continuing to promote the view that officers are deliberately misleading members with a specific motive behind it.”

I wonder why he should suddenly raise this matter, over a year later, despite showing no interest in investigating it at the time?

I would be grateful if you could confirm the following:

2) If you are alleging that officers have wilfully misled members, then please can you indicate what you believe the motive behind it to be so that again I might investigate this further and could you provide me with any evidence that you have to support your claim.

Or alternatively if you are no longer making allegations about officer behaviour, can you please retract your allegations in an email circulated to members.

So, instead of addressing the legitimate questions which I’ve raised, the Chief Executive of this publicly funded authority has decided that now is the time to investigate something which should have been dealt with over a year ago, and which is of only passing relevance to my current questions which relate to far more recent events.

And I have an ultimatum which says that if I’m not prepared to provide evidence to support an allegation which I haven't made, then I must withdraw the allegations which he refuses to answer.

I have clearly stated the misrepresentations which were made to members - both verbally in the May committee meeting, and in the briefing note on the eve of the June meeting. I am seeking a point by point explanation of each item, detailing either why my understanding is wrong, or why the officers felt it necessary to mislead members.

However, protected by a Chair and Vice Chair who will do whatever it takes to preserve collective responsibility regardless of the public interest, the Chief Executive is able to act with total impunity as he ignores the misrepresentations and focuses instead on silencing the person asking the questions.