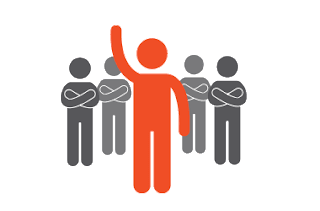 The system of governance at the Broads Authority has occupied stakeholders' minds for many years. Representations to MPs culminated in a meeting with 5 of them at Westminster in 2013 but - despite agreeing that the Authority's governance was failing and not fit for purpose - they didn't think it realistic to expect Parliament to devote more time to the Broads, having already spent considerable resources on approving the 2009 Broads Act.

The fundamental issue, in my view, is the absence of any system of accountability - democratic or otherwise. In theory the Authority should be accountable to its stakeholders (both toll payers and the general public as taxpayers). But there is no proper scrutiny of the Authority's decision making processes, and the recent drive to get rid of certain Members demonstrates the extreme measures which will be taken to preserve 'collective responsibility' whenever a Member cites concerns about public interest or prudent use of resources.

Because I had taken a robust stance in favour of fair play and openness, few were surprised when I was ejected from the Authority - despite the absence of any specific allegations or evidence of wrongdoing. What is less widely known is that a code of conduct complaint was made against me at the same time - and that this was dismissed by the monitoring officer, who said that I had a right to free speech and I had not breached the code in any way. But obviously that kind of outcome wouldn't have suited the 'executive', so urgent steps were taken to remove me before I could be found innocent.

Just 4 months later, Cllr Lana Hempsall found herself in a similar situation for disagreeing with a planning officer on the need for a small Parish Council to apply for planning consent to use a phone box as an information kiosk. Make no mistake, the officer was wrong - according to both the law and common sense. But, so ingrained is the Authority's belief that it must never back down on anything, that it was considered more expedient to remove the Member who was standing up for the public interest than for the officer simply to correct their advice.

Anybody can see that this is an abuse of due process, natural justice and the law. Members have a prima facie duty to act at all times in the public interest. Cllr Hempsall would have breached one of the fundamental principles of public life had she gone along with the demands of the Chief Executive and the Chairman of the Planning Committee that she pass on incorrect advice to the Parish Clerk. Because she placed the public interest ahead of her own, she was removed from the planning committee without notice on the basis of "inappropriate conduct".

Of course, neither Member was guilty of inappropriate conduct, at least not as defined in the Members' Code. But, whenever a Member looks as though they might be going off-message, the Chair & Vice Chairman of the Authority have become fond of invoking an unwritten principle that Members should, at all times, act as 'ambassadors' for the Authority. Members have been censured under this 'rule' for disagreeing with officer opinions and delegated decisions (i.e. decisions not made by the Members), and for any implied criticism of the Authority, even when made privately.

Right now, the Authority keeps dossiers on certain Members, including records of their social media activity and their history of speaking or voting against officer recommendations. The communications policy is used to prevent Members from speaking publicly without agreeing a script, and unconstitutional, un-minuted, disciplinary meetings are held to silence troublesome Members. The net effect is that Members are not bound simply by the code of conduct, but by the whim of senior Members who can impose their own personal opinion of "appropriate conduct" on others, with impunity.

Surely these most recent events must tell our legislators - both national and local - that all is not well at Yare House. Members must not be removed simply because they publicly disagree with an officer, or highlight shortcomings in the Authority's governance and management. On the contrary, that is why Members are appointed - to challenge, to scrutinise, to advise - and they must feel empowered to do so. Until the "Executive" accept this fundamental truth, the Authority will continue to face justified criticism and distrust from its stakeholders.
Posted by Unknown at 18:18